What happens when School Leaders sacrifice their Well-being? 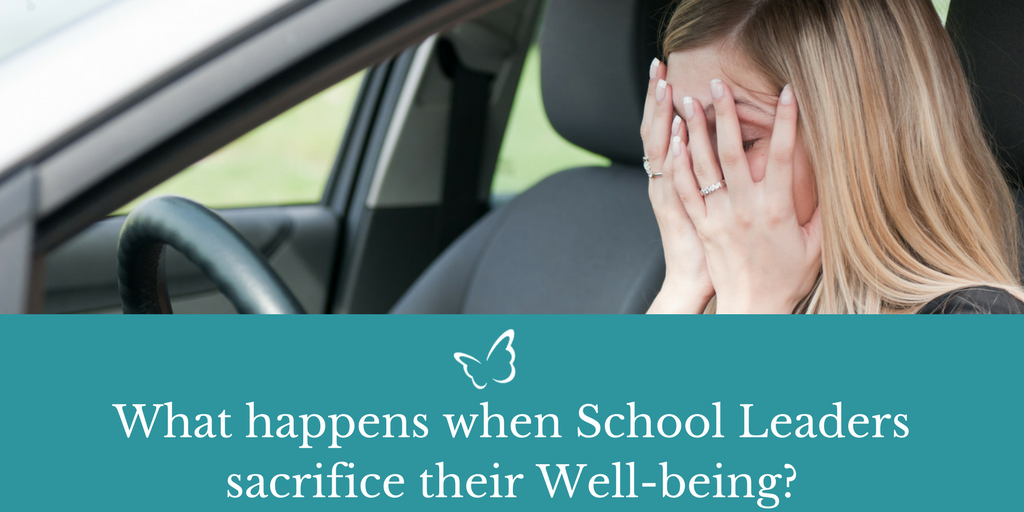 Recently I’ve been reflecting on my time as a Headteacher and in particular, one day in my Headship. On this day, I had a jaw-dropping revelation which transformed my experience of Headship and made me realise the reality of School Leadership needed to change.

Whilst this story is not necessarily a happy one for me, I’ve learnt that I truly believe that if we are to overcome the often overwhelming feelings of isolation that many school leaders feel, then we need to get better at sharing ‘true’ stories about the cost of school leadership. As when we do so, it helps to remind us that we are not alone and others may have shared similar experiences to our own.

Like many school leaders who I’ve met and coached since I left Headship, I came to accept tiredness, emotional overload and irritability as the norm. Nothing that I either observed or saw amongst my peers contradicted this perception; everyone was just so good at grandstanding that I believed we were all super human and had no need to have our emotional needs met.

Yet despite buying into the myth, I can recall countless moments when I gave and I gave and I gave. There were moments when I cried from the sheer exhaustion of giving all of the time but never stopped long enough to question the relationship between my inner emotional state and my outer performance as a leader. I just kept on going. Until one day…I decided to make a home visit to one of our Year 6 pupils, Luke. Luke was a child who I believed was a star in the making. He had a winning smile and a wit and intelligence that went way beyond his 11 years.

But there was a problem. There was nothing in Luke’s life outside of school that told him he was special that told him he could achieve his dreams and hopes for the future. He lived on the local estate which was just as soulless and depressing as most other high-rise inner-city dwellings and he lived in a home where love was regularly displaced with anger, retribution and fear.

However, that wasn’t going to stop me. I believed in Luke, I believed in what the future could hold for him. I believed that if we could just get his mother onside too, she would also come to believe in the vision that I held for her son.

When the giving has to stop

So after another typical day of giving [and on top of my everyday expected head teacher duties sorting out a raft of problematic HR issues, responding to a few worrying child protection cases and seeking to meet the often conflicting ,‘urgent’ needs of others] I went across the estate to visit Luke’s home with a French-speaking colleague.

Within minutes of entering his flat, his mother, in a mixture of French and broken English hurled a torrent of abuse at me. At 7.00pm in the evening didn’t I have better things to do with my time? Who the **** was I to come her house and tell her how to raise her son? Rather than telling her what to do, shouldn’t I be at home looking after my own son?

At that moment something inside of me cracked. Perhaps if it had been another day, at another time when I wasn’t so tired, I would have found the inner resolve to stand my ground and speak up for Luke and the vision that I had for him and so desperately wanted her to see. But there and then, words failed me. Thankfully, my colleague spoke for me.

She made our excuses and we left Luke’s home. We climbed into my car and with the rain pouring down outside, I didn’t just cry, I sobbed. I let go of the wall that I had built around my emotions and sobbed until there were no more tears left to cry.

As much as Luke’s mother’s words stung, she was right. My priorities were skewed. I had equated putting the children of my school first with sacrificing my own life outside of school and meeting my own responsibilities and needs as a parent. If I hadn’t been so caught up in the endless round of giving and making less than conscious decisions, I would not have been in my car that night so emotionally spent.

If I had known how to spend more time ‘being’ and making conscious decisions, it is more likely that I would have arranged to see Luke’s mother during the school day. Then perhaps – just perhaps – she would have been more amenable and I would have had both the emotional and mental acuity to have had a rational conversation with her about her son.

Not what I had signed up for

However, such is the insidiousness of the Sacrifice Syndrome that before we know it we are caught up in its vicious cycle. We unconsciously adopt ways of thinking and patterns of behaviour that, often cause us more harm than good. It is not until something happens in our life that causes us to stop that we are forced to reflect and take notice of the consequences of our behaviours.

Sat there in my car that night, I felt an acute mixture of sadness, regret, loneliness, confusion, hurt and pain. This was not what I had expected headship to be about. Raising standards, fostering good teaching and learning, holding staff to account, yes, but the internal struggle between living out one’s own values and dealing with my own and other’s emotional baggage. No, I definitely did not sign up for this.

Up until that moment my ability to grandstand had meant that I had been able to hide my true feelings from myself as well as others. I was caught in the Sacrifice Syndrome with no apparent way out.

As I look back, I know what was missing – what I didn’t have. I needed opportunities to talk with someone or others who did not require anything of me, who would listen to me and not judge and who could create a space for me just to be myself, not Viv Grant, the head teacher. Just me.

An Opportunity to just be Yourself

As a school leader, you do an amazing job! Every day you invest enormous amounts of time, energy, passion and commitment – seeking to create better futures for our children and the communities you serve.

But this isn’t easy to maintain. Particularly, after a long week and the inevitable challenges of your role, it can often feel as though your energy, hope and emotional reserves are in short supply.

That’s why I believe it’s vital that you have someone who you can turn to, who can offer you a listening ear, support, encouragement to help keep you going towards your vision. If you are to sustain consistently high levels of effectiveness and develop as a leader amidst the growing emotional cost of school leadership, the complexity of the role and heightened pressure, this form of support is not just helpful – it’s vital.

However, I know when I was a Headteacher, finding someone with whom I could “drop the leadership mask” and talk openly and honestly about the issues, questions, doubts and feelings I was having in my role – was hard to find.

If you are a Head it is understandably difficult to share ‘fully’ with staff. There is always the risk of crossing professional boundaries. Friends and family might offer a listening ear, but again it isn’t easy. Unless they have walked in your shoes, it can feel like no-one really fully understands what you are going through.